This series is about my visit to Wyndwood Walls in Miami. Wyndwood Walls is s street art museum, where walls are converted in giant canvas with street art. The art is very colorful and I wanted to give a little twist to my visit there and make it a little surreal experience of my own.  … END_OF_DOCUMENT_TOKEN_TO_BE_REPLACED

The excitement was increasing by the hour thinking of my time off in Canada. From the classic trip to the Niagara Falls to exploring the vibrant Capital of Canada. Doing our own schedule and our own itinerary is a pleasure to me. Brings anticipated excitement, like kids when they wait for their Christmas gifts. We left after my regular work day, we flew to Buffalo and stayed the night there.
Next day our road trip officially started with a quick hour and 15 minutes drive to the Niagara Falls on the Canada side. While driving through Hwy 190 getting close to Robert Moses Pkwy you could-ed see the mist of the Falls from the distance. Hotels, and towers merge from the skyline while we were getting closer and closer. After passing the border to Canada, we took a loop that lead us to Niagara River Pkwy and I barely was able to concentrate on the map to find our hotel because I just wanted to stare at the beauty of nature. But I was my husband co-pilot and we were needing to find our hotel to leave our stuff and make the best of the day because the next day we were leaving to Ottawa.

And there it was, our view from our hotel room. We could stayed in our room just staring at it, but instead we grab our camera, our tour tickets that we bought before our trip and left the room.
Please visit my Spanish blog Mis Historias de Viaje to read the complete story of our Niagara Falls part of the trip. The blog is written in Spanish but there is a Translate option on the right side of the blog, look for English or any other language and you will be able to read it if you don’t understand Spanish. Here I will continue with our second part of our trip to Ottawa, but first take a look at the video I put together of our Niagara Experience.
Video
Ottawa Second Stop.
After having a complementary breakfast at the hotel we were set to go. We had plan to leave around 9am to be in Ottawa around 2pm but instead we left around 9:30am plus 5 hours of travel we should had been there around 2:30 but we stopped two times (one un-necessary) and we got a little lost when we were almost in Ottawa and we got stock in traffic in downtown Ottawa. That put us on Ottawa at 3:40 and that was inconvenient because we had a tour schedule for 3:30 😑.
We got to the hotel which it was great! But it didn’t have a view like the one we had earlier…

Typical city view…
Well there was no time to lose, we left our things in our room and went to explore the city. Again we had 24 hours to see everything we had planed, at 3:30 pm of the next day we were planning to leave and drive to Buffalo.
First we walk to the Parliament, Jorge knew that they offer free tours but we didn’t know how the system work, so we went to find out.

We found out that, we had to be before 8:30am in the line to get the tickets because is first come first serve, at 8:30 they open the door to the public.
After we found out this, Jorge and I sat down for a minute to plan how we were going to do everything the next day. Because we lost our tour for that day(the amphibus tour around the city and the Ottawa River with Lady Dive),we had to do both things the next day and that was not the original plan. So we decided to wake up extra (6am)early to have breakfast and then get the Parliament tickets, take the first tour and at 12 pm  take the amphibus tour. Everything sounded good, each tour length is about an hour.

At this point we were hungry and we went to a restaurant Pub(Sir John A)that Jorge wanted to take me, which was part of our plan for that day, we just did it a little earlier than planed. After eating our delicious Shepherds Pie and our tummies were extremely full we had the perfect excuse to walk the entire city up and down until our tummies went back to normal. The afternoon was pleasant, sunny with a crispy look. We saw the American Embassy and went by the Major’s Hill Park where the tulips were the highlight of the afternoon.

We went by the Reconciliation: The Peacekeeping Monument that commemorates Canadian soldiers. And from across the street we wave hello to the greeting spider in front of the National Gallery of Canada.

Before going to the Byward Market we had to photograph the beautiful Notre Dame Basilica. We heard that you should stop and go in the church to see the inside beauty. It is open to anybody that want to go inside. We didn’t know this until the next day, it was too late for us to go back and sneak in the church. We will do it someday when we come back. We did as planned, we were on a scheduled, we left our things on our rental car and went for breakfast. Yummy coffee in Second Cup another place Jorge wanted for us to visit because of the delicious coffee.

We continue our agenda walking to the Parliament office and stayed on the line for almost an hour, got our tickets and did the tour of 9:50am. It was a rainy morning and we knew it because we checked the forecast, but still we were a little disappointed in top that we were on a tight schedule we didn’t want to deal with the rain, but we had to. With jackets and umbrella in hand nothing stopped us. But the view was a little sad…

After going through security we met our tour guide. A very nice young man from Colombia that is been living in Canada for more than 12 years.

He first took us to the library, the only original part of the Parliament. The library was the only part that survived a 1916 fire, the rest of the building had to be restored.

Another part of the Parliament that we were able to visit was the Senate.

It’s amazing all the information and the interesting facts that you learn in this kind of tour. I wished that my history classes were like this back then when I was in school. Before leaving the Parliament we went to the Peace Tower and took a very gray picture of the Ottawa River. As scheduled we had a little bit of time for another cup of coffee before going to our Amphibus tour.  The Amphibus took around the city, our funny tour guide was very informative, giving us great information of the most important places we encounter on our way. The most fun part of course was being in the bus while going in the water, like that is a normal thing to do. We cruise through the Ottawa River like any other boat.

The back of the building is the library of the Parliament. ⬆️ 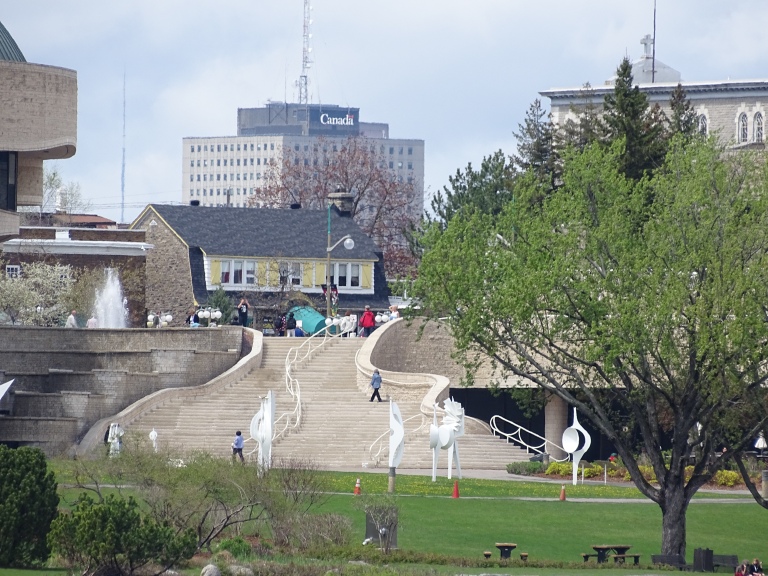 After we finished our tour we had plenty of time for lunch. We went by  the Byward Market and visit the Lowertown. I had the second choice of the Pub Favourites section. Thanks God we left perfectly on time for our trip to Buffalo.

We took a route that took us to Thousand Island area when crossing to US.  Is amazingly beautiful there, but that will be my next story.
Until then,
xamlinnette 🙂

2 thoughts on “Road Trip Around Canada, Making The Best Of Our Limited Time”