A Little Town in the North of Texas

Last September we did a road trip to Arizona in our fifth wheel home and did an overnight stop in Vernon, Texas. We ate in one of the local restaurants and we loved it so much that when we were coming back decided to stayed at Vernon again and went to the same restaurant .

The Creator carved the earth for beauty and our enjoyment. Where the mountains and oceans meet is the end point of perfection, it is definitely beautiful, a master piece. Xamlinnette The Dark Hedges

Belfast, Ireland History on the Making

When we were looking for tours for our cruise, we wanted to do something different in each place that we were going to visit. We notice the Electric Bike Tour in Barcelona. None of our other stops offered a bike tour, but this was not any bike tour. It was an ELECTRIC BIKE TOUR. When we read the description of the tour, said that we were going to be using MERCEDES BENS BIKES. “Wooa” I thought…

I love to ride bicycle but I am not a cyclist,and I am not a sport oriented person. I like to run bicycle in a very girly way. I always have this image of me running my bike with flowers in the bike’s basket, enjoying a beautiful scenery. Mountains, flowers, beautiful blue skies, crispy cool environment… And flat, straight streets or down hills street only, where the wind can caress my hair. Do you see the picture? That’s what I dream about, but for some reason it looks like this kind of image is only vivid in my imagination.

We already had the experience during the summer of riding bikes at Central Park in NY. After that experience we agreed that we never will do another bike tour or anything that include a bicycle, because we are not in condition to keep up. But my cute ignorance saw the description of ELECTRIC MERCEDES BENS BIKES, and I thought for some reason that this was some kind of scooter. The description of the tour said that we were going up hill, but I wasn’t worried about it because I was going to be riding a Mercedes Bens Electric Bike! Did I said ELECTRIC! It had to be some kind of a scooter, no doubt about it.

We were a small group of 8, four couples. There were two couple older than us, so I was convinced that this was going to be an ease thing. First we had to wait almost 30 minutes because our tour guide didn’t arrived on time or he said that he didn’t see us. Because of that 30 minutes delayed, the four and half hour tour became a 3 1/2 hour tour, in a literally bike that you have to pedal up hill!

When I saw the bikes my dream bubble popped really loud in my head. In top of that, the nice newer bikes were to tall for me. I am 5 feet tall, so I need little kids bike. The smaller bikes were older bikes, I had to carried an extra battery wrap behind in my bike just in case I ran out of battery. So, the way this work, you have to pedal and the battery help you to make it “easy” for you. But when you are going up hills… Hmmm when you are driving around hundreds of people around you in the middle of the city…

Oh boy! What an experience. It was hilarious, because I was in such a stress of trying to keep up with the group that every time I was going to start pedaling I couldn’t keep up my balance and I zigzag almost tumbling with everyone beside me. I was a menace for my group. Now, after I completed my zigzag at the beginning, then everything went well until we were up the hill. We started to fall behind until we were the last ones. Poor Jorge was so embarrassed. He was behind me, he didn’t want to leave me alone. When we got to the top our tour guide was all worried and ask us if we were ok. Jorge answer with an excuse than only him believed.

The “top” of the mountain for us, was just the lower station of Montjuïc Cable Car. From there, the cable car was going to take us to a higher station where the Montjuïc Castles is located. Each couple with their bicycles got in one cable car to the top were we all meet. 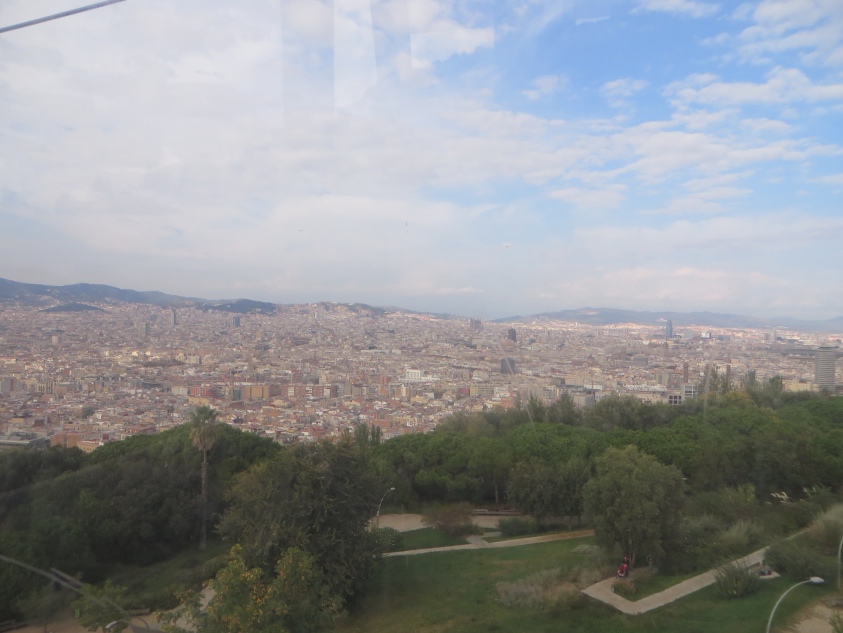 After we enjoyed resting in front of the castle for a few minutes, we went down hill. Now we are talking about! At this point I was enjoying my trip more than ever. This is the part of my dream that came true. when the wind caress my hair.

After this I tried my best trying to keep up with the group. For a moment I was the second one in line, behind the guide. I was pedaling like a maniac, I couldn’t stop or look back, I couldn’t take the chances of falling behind again. But when we stop to wait for the others… I lost my rhythm and started again with the zig zag…

When we were getting to the Sagrada Familia Church I was almost run over by cars… There were so many cars, so much people and I was so focus trying not to lose my group that I didn’t notice that the traffic light changed. It was a really scary moment for me, all cars where almost in top of me, they didn’t want to stop and I was already in the middle of the street, I didn’t have a choice that to keep going.

But over all I am so glad we did this tour. My adrenaline levels were overflowing my body. At night, when we were at the cruise eating dinner, Jorge and I couldn’t stop laughing remembering our crazy day in Barcelona. Jorge started to make fun of my zigzag riding style. We laugh so much that our waiter was intrigue of our laughter. I was even crying, my tears ran over my moving cheeks with no control, my stomach even hurt, it was hilarious.

The next post I will just share the random pictures that I took every time we stop on our way, for the tour guide to explain something. Check out the next post!